Despite clear warnings, Europe is out of IP addresses—again

Last year, RIPE ran out of new IPs—but this week, the used ones are gone, too.

Enlarge / This is RIPE’s new IPv4 waiting list. If you’ve never received IP addresses from RIPE before, you can request a single /24 (256 IPs) and wait for somebody to croak and relinquish theirs.
Jim Salter
Monday afternoon, RIPE—Réseaux IP Européens—or the regional Internet Registry for Europe, the Middle East, and parts of Central Asia—announced that it’s out of IPv4 addresses.

What this means is that the organization has handed out its last available /22 (1,022 address) netblock. If you need European public IP addresses of your very own, you must get on a waiting list and hope for some other company to die on the vine and relinquish its address space when it does.

There are some caveats to RIPE’s used-IPv4-address car lot, though. To get on the waiting list, you must never have received any subnet from RIPE in the past… and you may only receive a single /24 subnet. That gets you 256 total IPv4 addresses, three of which are used just to set the whole thing up (network, broadcast, and gateway). So if you plan to have more than 253 devices connected, you’re going to need to get thrifty and figure out how many of them can be put behind NAT (Network Address Translation).

RIPE clearly hopes that its announcement will spur IPv6 address adoption, but that seems unlikely. End users remain largely unaffected by IP-address exhaustion; they can still connect to their ISP, get the temporary use of one of the ISP’s IP addresses, and browse cat pictures with wild abandon. For the most part, small businesses are similarly unaffected—just like end users, they typically lease their IP addresses from a local ISP and fully expect to need to relinquish those addresses when and if they change Internet providers.

The real pressure address exhaustion puts is largely on startup Internet service providers. In order to offer Internet access to 10,000 people, you will generally need a netblock of 10,000 IP addresses to hand out to them. Without that netblock, you don’t have much chance of becoming an Internet service provider—and if you already are a large ISP, perhaps you’re a bit cynical about anything that makes it easier for competition to creep in.

Of course, ISP in this case doesn’t just mean last-mile carriers such as Spectrum, AT&T, or British Telecom. Cloud providers such as Azure, Digital Ocean, and Linode are also Internet Service Providers, and they cannot function without large blocks of IP addresses to lease to their customers. A lack of new IP addresses to allocate means a significantly raised barrier to entry for new players in either local or cloud ISP markets—and the likelihood of stagnation and protectionism on the parts of those who’ve already got theirs.

The only way to avoid this otherwise-inevitable slide toward an IP-address-based water empire is to leave IPv4’s limitations behind entirely and migrate to IPv6. There are only 4.2 billion IPv4 addresses possible, but the IPv6 space consists of 340 undecillion individual addresses. Unfortunately, the very organizations in the best places to drive IPv6 adoption—large Internet service providers—have arguably the least motivation to do so. 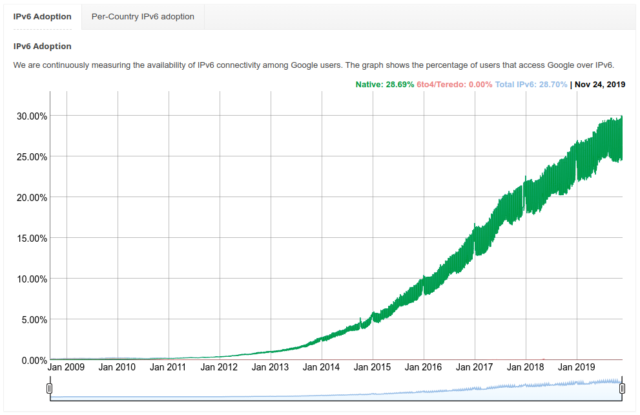